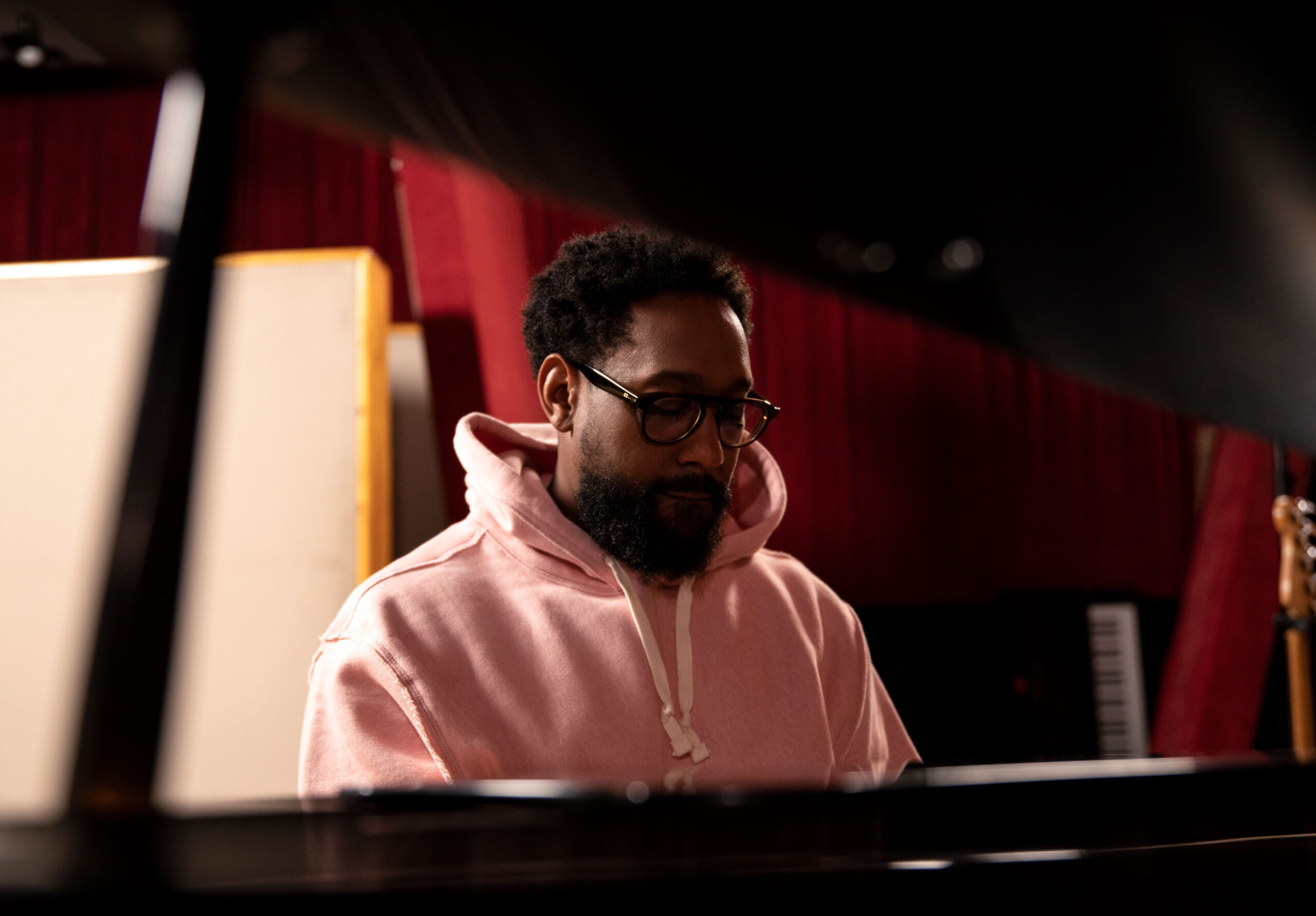 It’s not uncommon in the music industry to hear that someone’s humble beginnings began in the church as a young child. What may be uncommon is for you to hear that, as an adult, that person still sees himself as that young kid who just wants to share a message of God’s love. The latter best describes the one I had the opportunity to sit down with recently to chat about his life. PJ Morton is an American Grammy Award winning musician, singer, songwriter, and record producer, and, get this, he’s also the keys player for Maroon 5.

The quiet, confident swagger drippin’ of PJ may in part be indicative of being born and raised in New Orleans, Louisiana, but honestly, it’s so innate in him, he could have been born anywhere. Since we’re talkin’ drip, let’s go ahead and acknowledge PJ’s sense of fashion. It’s stylishly eclectic, colorful, and comfortably presentable. PJ has always cared about presentation, a trait stemming from his Catholic days of school and wearing uniforms. As a kid he would look forward to dress-down days. He went against the status quo—his fashion choices becoming one of his earliest unique signature expressions of his creativity.

PJ credits some of his fashion sense to the fact that his mom, while he was growing up, always had the TV tuned to runway fashion shows. As he’s notoriously known for his message of love, it comes as no surprise that he spreads that love to the women closest to him in life, first to his mom and then to his wife, Kortni. When he speaks about Kortni, there’s no mistaking his love as he states, “My wife is Superfly, just a natural sense of style. I’ve always loved that.” The pride he has for his family is evident, including for the loving and amazing family he grew up in. Now, being a father is his favorite thing, he attests. His advice for other fathers? “Have grace,” he says. “Just like you, every single kid is an individual. Take it easy and understand that you are there to guide. I think love is the main thing.”

PJ and Kortni will celebrate 13 years of marriage later this year and are parents to three children. The couple’s creativity flows in excess to Jakai (age 15), Paul, whom they call P3, (age 10), and Peyton (age 8). Jakai’s creativity lies in sports, especially now that he stands about 6’1”. P3 is described as a future movie director because he’s always putting on shows and making up characters. As for Peyton, PJ’s princess, he sees so much in her, especially her ability to draw, which PJ relates to. He started out drawing as a kid himself. When he does tours, he still draws out the stage plot and his ideas for wardrobe.

One of the most fascinating things I learned about PJ during our conversation was that he was incredibly shy as a kid—the shaking and afraid level of shyness. His father knew he could sing and would continually push him towards it. Had it not been for his father, we would not know PJ as the Live Show Killa—named as such because when he puts on a show, it’s almost as if he’s a DJ. The music never stops and no two shows are the same; they always reflect different expressions of his genius artistry. The crowd favorite, “How Deep Is Your Love,” will always be part of the setlist. If not, PJ would have some very angry fans.

A personal favorite for PJ is “First Began.” Listeners are expecting a beat to drop, but then have an intriguing surprise when they hear the slightly outta tune sweetness. It’s intentional on PJ’s part, so much so that he’s known to ask, “Who’s new in the audience?” He delights in watching the music transform the ear of the beholder. Music is a language that knows no barrier. And PJ, a voice for the voiceless, has shown through every one of his bodies of work that he’s fluent in that language. He connects every heart and ear in a way that brings perfect harmony. Almost as if the audience is a choir and he’s the director.

One would think that a masterful conductor of sound waves like the PJ Morton wouldn’t share his trade secrets, but he does. I’m gonna blow your mind when I share just a bit of those precious gems. Ya know, it’s kinda our thing we do here with this magazine; it’s literally our name. 😉 Anyhoo, I digress… allow me to continue. Remember when I told you that PJ has a quiet, confident swagger? I truly believe it’s because he’s taken to heart the age-old wisdom passed down from our elders, generation to generation. That advice? “Just be yourself.” Easier said than done… trust me, I know.

However, PJ continues our conversation with a further word of encouragement that we can all draw strength and confidence from, for our respective situations.

“Today is probably the best time in the world to be a creator. There’s an audience for you… the only thing that separates you is you being exactly who you are.”

MB Mag Fam, I need y’all to go subscribe to our YouTube channel, The MB Mag. Why? Cause you’re not going to want to miss this interview when it goes live. I promise I didn’t even remotely touch all the gems PJ holds in the prowess of his creative mind.

I will leave you with this. PJ’s advice? It’s tried and true, by Mr. PJ Morton himself. PJ’s life, family, and body of work have shown us that if we authentically share ourselves and love without conditions, you can inspire others to be their most authentic selves. My mentor, pastor, brother, and friend who’s also an insanely talented independent musical artist is one of those people who has been inspired by PJ’s honesty to and in his craft. In a separate interview unbeknownst to PJ, I sat down with KJ Scriven. During my interview with PJ, I surprised him with my interview with KJ. Before I share what KJ said, let me just go ahead and acknowledge the irony that surrounds these two men and their two initial monikers. Haha, I know, and hope you’re still able to follow along.

“Never doubt your impact. You’ve inspired more people than you know, and your best music is still in front of you.”

Off camera, I continued to show PJ more of the interview. At one point KJ shares very specifically, almost verbatim, about a certain song from one of PJ’s earliest bodies of work. I stood next to PJ, hearing him mutter to himself, “Wow… whoa… that’s why I do this… I’m honored.” Seeing the revered resolve in PJ’s eyes was riveting. I honestly feel as though I would be exploiting the moment if I were to share anymore of what I experienced while watching PJ take in the feeling of having a fellow brother express his love and appreciation for him.

I will say, though, that the look in PJ’s eye has me eagerly awaiting the songs that will be born from the continued sincerity of his unwavering truth—a remarkable steadfastness and commitment to being his authentic self.

You got work ahead of you, PJ… special only, right? 😉