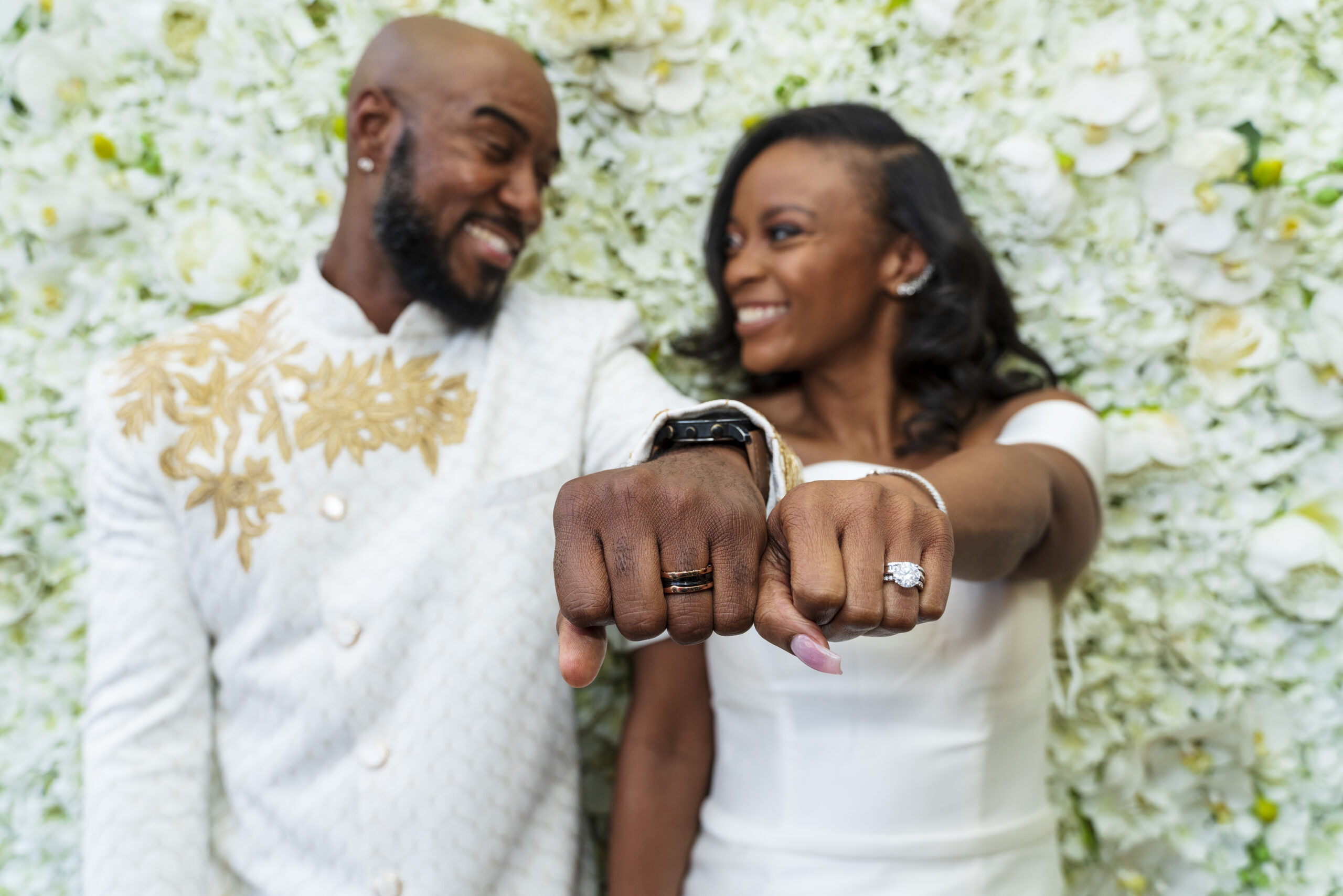 Kristle and Lavell met when Kristle and her twin attended an event Lavell was filming. She recalled admiring the professional group of young, Black men filming the event. She didn’t notice her future husband right away, but when his company, “1 Eye 1 Vision Productions,” was given a shoutout, she spotted Lavell in the corner on his laptop. “I asked my manager, ‘Girl who is that?’” Kristle explained. She shared how she then emailed him that night, professionally, as she truly wanted his company to film her and her sister. However, she confessed she also reached out to “of course, feel him out to make sure he wasn’t taken, lol.” That one message led them down the aisle on April 17, 2021!

Lavell confessed he knew “KP” was his future wife when he was going through a rough point in his life and she stored his film production equipment in her garage. “Mind you, we had just started dating and that equipment was worth close to 10K.” She stored it for him for several months. “I thought to myself, hmmm … yep! It’s time to start working on the ring design! Lol.”

Kristle, on the other hand, knew Lavell was the one when she reflected on how she knew where her place was in his life. Even more so, certainty came when she knew their relationship glorified God. “Being with Lavell didn’t compromise my relationship with God, but strengthened it, which was the number one thing that I prayed to have with my husband.” She shared that, through her life experiences, she understood that God wouldn’t send her someone that would corrupt her character or lead her astray. Lavell didn’t drain her energy or disturb her peace but instead edified her. She finished by saying, “I knew Lavell was the right one because he makes me feel good about myself and loves me just the way I am.”

Leading up to the proposal, Lavell admits he was “low key a train wreck!” He carefully took the time to design a ring that was both a reflection of himself and “my baby Kristle’s lifestyle.” When COVID happened, his plans were almost taken out. He had his mom, sister-in-law, cousins, brother, sister, and Aunty, all ready to go, just wanting everything to be right. He shared how “God placed the correct energy in my heart and told me to just go for it! So, I jumped in like a teenage girl playing double Dutch! Lol.”

On the day Lavell proposed, Kristle shared how overwhelmed she was with all the feelings. “I definitely gave my ugly cry, lol.” While Lavell surprises her all the time, Kristle stated this surprise made her the happiest woman alive. She admits she was confused leading up to the proposal. “It was Xmas day and both our families were at my sister’s house. As people were preparing to leave, Lavell and Kerese (my twin) kept saying we have to take a selfie video before everyone leaves.” She recalled Lavell holding his phone and their families sitting in chairs. Because they are in the film world, it wasn’t out of the norm for him to be talking to the camera. He called her up to the camera and she shared that she was being silly. “Then Lavell begins to compliment me, and I’m bowing and still being silly, and the next thing I know he bends down on his knee, and I remember gasping for air and exhaling seconds later.” She shares her first thought was, “God, you didn’t forget about me.”

They both believe the most important factor of their successful marriage is what they call the marriage triangle: communication, understanding, and honesty. “Love is an offspring from this.” When they walk through difficult times in their relationship, they have learned several rules of engagement. “We don’t argue or hit below the belt. That’s a no-no!” They learned to listen and understand instead of just responding. Also, they work to give one another space to allow feelings on both sides to be heard and considered. “Never tear your partner down to the point that they cannot receive you again or cannot pour into you when you need them. Trust me, you will need them again! That’s God’s path as He is our head of house!”

For their first holiday season together, Lavell and Kristle are planning to start their own tradition. Each year, they will travel with their close family members and enjoy each other’s company in Napa Valley. “We love family and our family loves us! We wouldn’t have it any other way … Period!! Lol!”

Likewise, each of their first holidays together they spend with family. “We are super big on being family-oriented. Our village is strong, and we will make sure that extends beyond our name!”

When it comes to preparing for marriage, Lavell and Kristle offered several key pieces of advice:

Lastly, they shared one of their favorite verses.

“For I know the plans I have for you,” declares the LORD, “plans to prosper you and not to harm you, plans to give you hope and a future.”